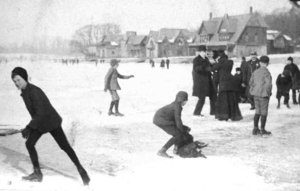 Our club traces its roots to the joining of two organizations: The Humane Society of Philadelphia and the Skater’s Club of the City and County of Philadelphia. Here are some highlights from our history:

Founded in 1849, The Skater’s Club of the City and county of Philadelphia was the first skating club in North America. Its members skated on frozen rivers and lakes in the Philadelphia area. The club’s objectives were “instruction and improvement” in the art of skating, cultivation of friendship among the skaters and the rescue of people who fell through the ice.

Years later, when the Humane Society ceased to function, its organization and responsibilities were acquired by the Skaters Club of the City and County of Philadelphia.

On February 28, 1861, The Skaters Club of Philadelphia became The Philadelphia Skating Club and Humane Society (PSC&HS). In the subsequent decades, club members skated on the Schuylkill River and enjoyed their clubhouse in Fairmount Park.

In 1910, the club moved its activities to the Philadelphia Ice Palace, located at 45th and Market Streets in Philadelphia. There we hosted the United States Figure Skating Association National Championships in 1924 and 1934.

In 1937, the PSC&HS bought land from Haverford College to build our present club-owned facility in Ardmore. This facility, which opened in 1938, has since been expanded and upgraded for year-round-skating and energy efficient cooling and heating.

In 1941 and 1949, we hosted the North American Figure Skating Championships.

Between 1923 and 1945, PSC&HS members held 16 national titles. Since then, we have had four national title holders and numerous national medalists and competitors.

Some of the rich history of the club can be found in the US National Archives.